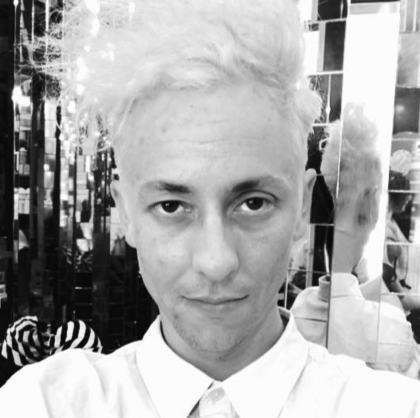 Anthony Lister (B. 1979, in Brisbane, Australia) completed a Bachelor of Fine Arts degree at the Queensland College of the Arts in 2001 and was then mentored by Max Gimblett in New York in 2002 and was the recipient of the 2004 Queensland Education Minister’s Art Award, with a further mentoring workshop residency at Blender Studio, Melbourne.

Each canvas has its place in the timeline of Lister’s life, revealing his passing interests, social consciousness, and intents. His influences are varied: graffiti, installations, stencilling, Pop art, comic book imagery, cartoons and his recollections of childhood when everything seemed fascinating and animated super-heroes ruled his television screen.

High and low culture clash in his paintings, drawings, and installations where boorish superheroes, flirtatious ballerinas, bad-tempered old masters, and imperious vamps raucously coexist. With bold and brash spontaneity, he paints the complex contradictions of everyday life with an element of humour. His imagery can be read as having a political and social message – good versus evil; right versus wrong, and Batman versus the Joker.

The look of Lies

Seen Him in My Dreams